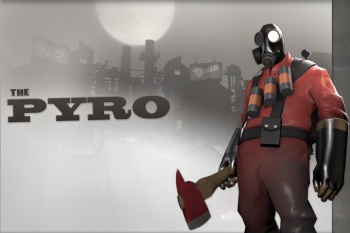 Valve is releasing a new gameplay mode, maps, and the final "Meet The Team" video.

We knew it was coming. It's been prophesized since the very beginning, and is finally coming to pass. So know now that in the year 2012, Valve is finally releasing its final class-based Team Fortress 2 update. The update, arriving this Wednesday, will focus specifically on the Pyro class and comes with a host of new maps, achievements, and a new gameplay mode, all culminating with the release of the final "Meet The Team" video.

True to TF2 announcement form, information about the update is being is advertised piece-by-piece each day before release in the form of absolutely insane website updates. Monday's update tells us about the Doomsday gameplay mode and its 11 achievements. "Doomsday pits BLU against RED, with only one team getting the honor of transporting a suitcase nuke full of recalled Mann Co. Australium to American monkeynaut Poopy Joe's rocket, so he can blast off and hunt down Soviet space chimp Vladimir Bananas," the TF2 website states. "It's the same spirit of competitive enterprise that stalled the moon landing by three years when Buzz Aldrin suplexed Neil Armstrong into a pile of folding chairs at Astromania '69!" From what we can tell, the Doomsday mode features both teams transporting fuel into Poopy Joe's rocket, ending with a spectacular launch that will assist the Monkey Cold War effort.

Of course, there were clues that the Pyro update was on it's way, as some attentive TF2 Community Users were aware when a Pyro-theme ARG quietly ran behind the scenes. Its full scope is too convoluted to recount in its entirety here, but rest assured it was as intricate as it was convoluted, involving out-of-place crafting items, hidden error codes, and even a blog post written by the Pyro with a freaking Morse Code translation.

Tuesday's and Wednesday's updates will likely share information about various new maps, weapons, and (of course) hats, right up until "Meet the Pyro"'s preimere on the TF2 website. There's no word yet as to whether this is connected in any way to Valve's partnership with Adult Swim, but given the significance of Valve finally completing their video series it's unlikely to be a coincidence.

Uncivil War: Left 4 Dead - "Get To The Choppa" Challenge! Jim And Yahtzee 48 Comments