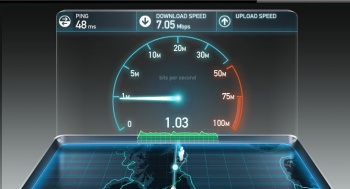 The speed of your internet connection is decided by a variety of different factors, including the efficiency of the cabling used to connect your local networks to the outside world. In our speedy modern times, these "backbone" cables tend to be fiber-optic in nature, coding your information into light and providing that light with a safe and easy route to its destination. As of writing, these cables are capable of some impressive speed-feats; but a new kind, tested this week by an international team of researchers, has been found capable of sending data at an incredible 2.5 terabits per second.

Professor Alan Willner and his team at the University of Southern California, working with colleagues at NASA's Jet Propulsion Laboratory and Tel Aviv University, achieved this feat by applying the principles of orbital angular momentum to light waves sent by fiber-optic cable. Their work was published in the journal Nature Photonics.

Ready for some physics? Sweet, me too. Orbital angular momentum is a fairly complicated idea, but according to the BBC, it basically works like this:

Light can have both these types, but the spin version is the far more familiar - as what is commonly called polarization, or the direction along which light waves wiggle. Polarizing sunglasses and many 3D glasses work by passing one polarization and not another.

In many data-carrying applications involving light, more data is packed on to light waves by encoding one polarization with one data stream, and another with a different stream.

That means twice as much information can fit within the same "bandwidth" - the range of colors that the transmitting equipment is able to process.

Willner and his team successfully demonstrated the technique across one meter of cable, with two sets of four light beams with specific orbital angular momentum "twist" arranged to work in tandem. However, further adjustments will be required to reach the cable's twisty speed across larger distances.

"One of the challenges in this respect is turbulence in the atmosphere," said Willner. "For situations that require high capacity... over relatively short distances of less than 1 kilometer, this approach could be appealing. Of course, there are also opportunities for long-distance satellite-to-satellite communications in space, where turbulence is not an issue," he continued.

Having cabling capable of carrying 2.5 terabits per second does not, sadly, mean that we're likely to get anything close to that on our home or mobile machines anytime soon. Still, successful testing and implementation of this technique could pave the way for just those kinds of advancements in the future, with smartly twisted light washing away the layers of frustration born of speed issues so specific that they often feel deliberate. Doesn't that sound nice?