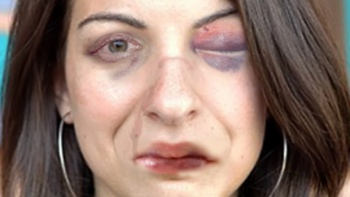 When FeministFrequency writer and videomaker Anita Sarkeesian started a Kickstarter to fund a video series examining problematic and sexist tropes regarding female characters in videogames, she sought a paltry $6,000 to make it happen. After igniting a reactionary misogynist firestorm, she came away with over $160,000. The harassment campaign against Sarkeesian hasn't ended with the Kickstarter, though; it now includes an interactive videogame where the player is invited to punch her in the face.

"Anita Sarkeesian has not only scammed thousands of people out of over $160,000," writes the game's maker, who goes by the handle of "Bendilin," "but also uses the excuse that she is a woman to get away with whatever she damn well pleases. Any form of constructive criticism, even from fellow women, is either ignored or labelled to be sexist against her."

"She claims to want gender equality in video games, but in reality, she just wants to use the fact that she was born with a vagina to get free money and sympathy from everyone who crosses her path."

There has, in fact, been a ton of reasonable (and not-so-reasonable) discourse in the gaming community recently regarding the treatment of women in and out of games. Some of that discourse agrees with Sarkeesian, and some of it does not, and even criticizes her. Most of it manages to do so without being sexist, even.

But that's besides the point being made here. Kickstarter doesn't hide the amount of money that has been donated. People chose to give to Sarkeesian's project knowing full well that it had wildly outstripped not just the original $6,000 mark but all of its stretch goals. By that very definition, as long as she works on the video series and delivers, calling it a "scam" is a ridiculous stretch even if you disagree with her viewpoints.

What makes this so troubling isn't that people disagree with her viewpoints - which is in itself perfectly reasonable - but that there is a campaign of harassment to keep her from expressing her viewpoints in the first place.

Of course, the great irony here is that the vicious response is not only giving Sarkeesian's cause way more publicity than it would have otherwise gotten, but does more to illustrate the problem of misogyny in nerd/gamer culture way more than a video series ever could.

Because seriously, making a videogame about beating a woman in the face for daring to express the point of view that a male-dominated industry doesn't always treat women and female characters like it should, is kind of just making her point for her.

Update: The game has been "blammed" by Newgrounds users, effectively removing it from the site. That's probably for the best.

Comics and Cosplay Features: LeSean Thomas: (Cannon) Busting Out All Over WldCard 1 Comment