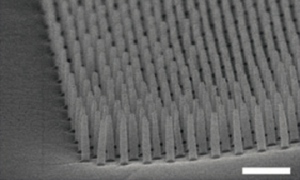 Scientists have developed an electronic sensor that's as sensitive as human skin.

Lifelike androids are a staple of science-fiction stories from Asimov to Alien, but real technological hurdles prevent an autonomous robot eating a sandwich with you at the local deli. Never mind the obvious AI problem, androids need a complex nervous system to absorb the details of its surroundings. We often devalue how important the sense of touch is in our lives. A robot that can't feel with its fingers would be a poor approximation indeed, but science has yet to produce a material which could come close mimicking the sensitivity of human skin. Korean researchers from the Seoul National University developed a sensor which can measure not only touch pressure, but twisting and shear stress on the "skin" as well.

The lead engineer Kahp-Yang Suh wrote a paper which appears in the Nature Materials journal today describing a mesh of extremely thin plastic fiber "hairs" - 100 nanometres in diameter and one micrometre long. Suh coated these hairs in metal so that they conducted electricity, and wrote software to interpret the smallest change in the hair's electrical resistance.

Not only can Suh's material detect a ladybug crawling across it, but also pinpoint exactly where that ladybug made contact.

The applications for a flexible sensor with such accuracy are numerous, and Suh is in talks with a manufacturer to make heart monitors using the stuff. But of course, the only thing I'm thinking about is Data, Bishop and the skinjob Cylons are probably covered with something similar.