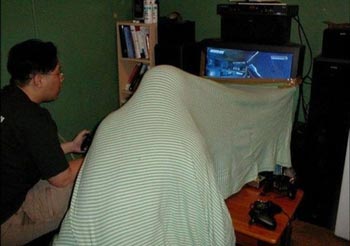 Professional League of Legends team, Azubu Frost, is down 30 grand thanks to its screen watching antics.

By most accounts, the recent League of Legends World Playoffs have been troubled. Not only has the competition been marred by numerous technical issues, the results of the quarter-finals have now been called into question following accusations that some players used the venue's giant monitors (the ones meant for the crowd) to cheat.

For some reason, it never occurred to the event organizers that a giant screen showing where each player is might confer an unfair advantage to players who glanced at it. Rather than say, spend twenty bucks on a screen to put between the players and the giant monitors, officials elected to rely on the honor system. Players were instructed to face ahead their monitor at all times. This worked about as well as you'd expect, numerous players were caught looking at the screens. Most were let off with warnings after officials decided their bouts of screen watching didn't give them a real advantage, but one team was found to have cheated, and they've been hit with a sizable fine as a result.

Officials found that one player, Woong, gained a clear advantage in his quarter-final match by looking at the big screens, and that his team, Azubu Frost, changed their tactics after he passed information onto them. Despite the fine, which covers the prize money Azubu Frost would have received for reaching the semi-finals, the matches aren't being replayed, as Riot believes Woong's cheating didn't decide the winner of the game. TSM, the team which lost, could possibly complain, but it turns out they were screen watching too.

The traditional punishment for screen watching, as decided by the court of TimeSplitters 2, is a quick elbow in the ribs followed by a medium-grade titty twister for repeat offenders.

This Is How We Do It: 9 Differences Between Heroes of the Storm and Other Mobas Rhykker 20 Comments

Take My Money: Fight Back with the Best XCOM 2 Gear TrishaHershberger 1 Comment