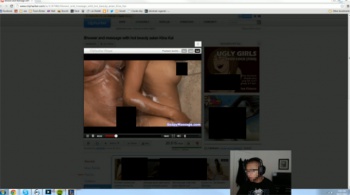 It turns out that alt+tabbing doesn't turn off your webcam.

Rather than curl up into a ball and wish for death, Slooshi seems to be taking the gaffe in his stride. Once he got a grip on the situation, he changed the banner of his streaming site to read "Got caught fapping AMA" and has even joked that his impromptu genital fondling was a legitimate "tactic."

Slooshi isn't the first victim of accidental livestreaming. Last month, small time DOTA streamer, Zyori, became infamous when he failed to turn off his streaming program before wandering around semi-naked. Viewers were treated to the sight of Zyori, naked from the waist down, scratching his scrotum and spending a minute appreciating its scent.

More recently, professional StarCraft 2 player, Illyes "Stephano" Satouri, was suspended from play for a month following a series of off-color jokes about child abuse he made during a game he assumed was private.