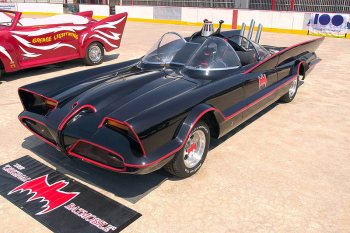 For the first time ever, the Batmobile from the 1960s television show is being put up for sale.

For some of us, there's only one true Batmobile: the fearsome, finned, double-domed convertible monstrosity that prowled the streets of Gotham in the 1960s. There are few vehicles more instantly recognizable, and for the first time ever, the opportunity to own this bad boy is being made available to one and all.

The goddamn Batmobile is actually a heavily-modified Lincoln Futura concept car, itself a one-of-a-kind vehicle, that was created for the television series in 1965 by George Barris. Barris' has many noteworthy automotive creations to his name including KITT, the General Lee, the Munster's car and others, but the Batmobile is his best-known work and it's remained in his collection since he built it. The car is powered by a 390 V8 engine and a B&M Hydro automatic transmission, and features numerous Bat-customizations including a Batphone, remote Batcomputer, Batscope, Emergency Bat-Turn Level and more. (Not all of the extra Bat-options are guaranteed to work.)

How much it will fetch is anybody's guess at this point, but you can bet it won't be cheap. The Batmobile will go on the block at the Barrett-Jackson Auction House on January 19.

The LEGO Batman Movie - Everything is Still Awesome Marter 66 Comments