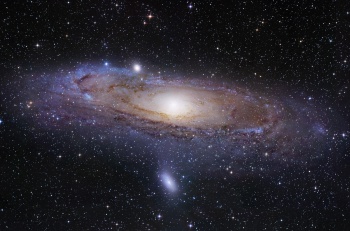 Scientists want to get to know the place a little better before we move in.

Currently located about 2.5 million light years from our little planet, the Andromeda galaxy is a feature of the universe that our hopeful descendants are going to get to know really well when it smashes into them in roughly 4.5 billion years. In order to make sure they're as well-armed as possible to face the collision, present-day scientists at the Panchromatic Hubble Andromeda Treasury (PHAT) and a few friends are trying to gather as much information on Andromeda as they can as part of their Andromeda Project. This, if you were wondering, is where you come in.

The PHAT team and its collaborators are one of 20 groups using information from the venerable Hubble telescope to try and learn more about Andromeda. Specifically, their project involves picking out star clusters and background galaxies from Hubble's images of the region in order to further our understanding of spiral galaxy and star cluster formation. The team hopes that by getting broswer-based volunteers to pick out these points of interest as part of the Andromeda Project they'll be able to vastly broaden the scope of their search in addition to receiving more accurate results. If you want to take part, just head on over to the project's site. After a brief tutorial, you'll be picking out background galaxies for the good of science like you were born for it.

"But wait!" I hear you cry. "This sounds super-menial. I mean it's pretty and the scope of it is amazing, but still, menial. Can't they make a computer do it?" You're right, citizen scientist. That should indeed be the case. Sadly, however, the various programmes that the project team created to try and distinguish star clusters from white noise proved too likely to identify a star cluster as white noise and vice versa. This is a job that needs human eyes, both to appreciate the astonishing beauty of Hubble's incredibly detailed images and to unlock the discoveries they hold.

"We couldn't get to the point where it could pick out a large number of clusters we identified by eye," said Anil Seth, the team's lead investigator. "There were thousands of candidates that weren't real clusters."

"The general benefit is to better understand how spiral galaxies form," continued Seth. "Andromeda is the nearest example of a [spiral] galaxy, except for the Milky Way...We can study in detail things we can't see in larger distances."

So, there you have it. Head to the Andromeda Project site if you'd like to examine some amazing Hubble imagery for a while, all for the good of science. It might not be as exciting as playing a game where you pretend to head out that way, but who knows, it could turn out to open your mind in just as many ways. Scan on, space friends.