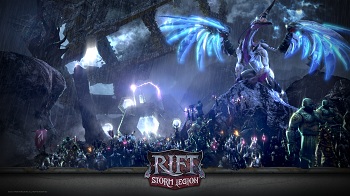 Trion Worlds has let go as many as 40 developers and artists.

You may recall that End of Nations has seen its share of developer troubles, what with Petroglyph losing the property and being forced to downsize 19 of its people. The property found a new home at publisher and developer Trion Worlds, but Trion is itself undergoing a sea change, and an unknown number of staff - perhaps as many as 40 - have been let go.

According to a statement made by Trion, the layoffs were "in response to market conditions, product timelines and the natural evolution of our company." It's not known at this time what those developers might have been working on; currently Trion is developing three games, including End of Nations, and publishing a fourth.

The most likely team affected, according to Gamasutra, is the one working on Rift, Trion's fantasy MMO, but Trion has refused to confirm this.

Rift's latest expansion, Storm Legion, launched in November and is currently on a "try it for free" offer until December 18th. It may be that the MMO is shedding fat after the expansion launch, but the timing is unfortunate, coming so soon after the muddle over at Petroglyph.