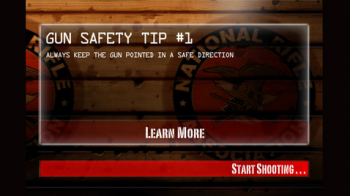 Your four-year-old can learn vital gun safety tips from our game, says the NRA.

You may recall that the NRA has dipped its metaphorical toes into the cesspool of gaming before, with the PS2, but - since that console has gone the way of the dodo - the NRA apparently figures mobile gaming is the future of guns. Or something along those lines, anyway; feast your eyes on NRA: Practice Range, the latest weapon in the fight for freedom, intended for ages 4 and up.

It's free to play, with in-app purchases - new guns, basically - and takes you on a magical journey with three shooting ranges, nine firearms, and three distinct difficulty levels. It's pretty clearly aimed less at virtual shooting than it is at informing the player of vital facts. It doesn't stop at telling you not to point your gun in an unsafe direction; it has all sorts of neat information on offer, about hunting season, gun laws, NRA news and so on, each button linking to an NRA-approved resource. Or to put it in its words:

NRA: Practice Range puts the NRA's broad scope of resources in the palm of your hand - with 2nd Amendment newsfeeds, gun law information centers and educational materials that you can access anywhere, anytime.

✔ Read up on critical safety and training tips!
✔ Get the latest news and legislation updates!
✔ Know your rights from state to state!
✔ Always stay informed!

This, mind you, from the same NRA whose Vice President Wayne LaPierre recently ranted about violent video games. Perhaps target shooting isn't on the same level as LaPierre's "filthiest form of pornography" - that is, gaming - particularly since targets don't shoot back. Though I can't help wondering how those suspiciously human-shaped target silhouettes fit in with LaPierre's "fantasizing about killing people" shtick.

The Big Picture: The Devil You Know - Part I MovieBob 99 Comments