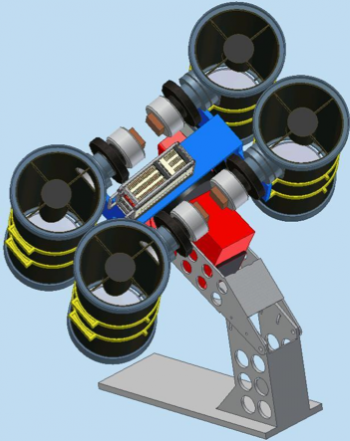 A Hawaii scientist's ATLAS project would find asteroids a day or more before impact.

In the wake of a meteor exploding over Russia, Hawaii's KHON is reporting on a NASA investment in a system for early asteroid detection. Currently called the Asteroid Terrestrial-impact Last Alert System (ATLAS), it is being developed by Dr. John Tonry at the University of Hawaii Institute for Astronomy. "It's gonna involve small telescopes about the size of a good garbage can, but very wide fields of view and the intent is to basically scan the whole sky a couple times a night and that makes it possible for things to sneak through," Tonry said. Nonetheless, if ATLAS were up and running it would have provided about a day's warning to the people in Chelyabinsk, where a meteor shattered windows, collapsed a factory wall, and left hundreds injured. NASA has approved $5 million of funding for ATLAS.

Using ATLAS, says Tonry, "We can say it will be exactly such and so a position to within a mile and it'll happen at exactly such and such a time within a second." Asteroids the size of the russian meteor fall to earth about once a year, but we do not always see them because they hit remote locations. "It struck me that there was this kind of hole, that this imminent impacter risk is real and it comes from very small things," said Tonry. The Chelyabinsk meteor was travelling at about 33,000 miles per hour (53,000 kilometers per hour) and exploded with the force of an atomic bomb - though it was at least 18 miles (29 kilometers) off the ground.

There is currently no available information from NASA as to when the ATLAS would begin operations, but it's comforting to know that it was already in development.