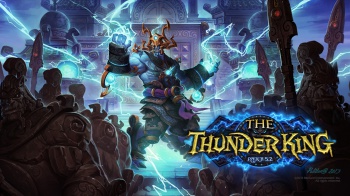 Hear about the new patch from Blizzard's lead encounter designer.

Blizzard released the fourth expansion - Mists of Pandaria - to its major MMO this fall. With the last expansion, Cataclysm, the player base complained that it took far too long for new raid content to be added to the game in patches. Blizzard didn't want to wait this time around and Patch 5.2 - The Thunder King released today, a mere 6 months after the expansion. The Thunder King focuses on the resurrection of Lei Shin, the first emperor of the stone-like Mogu who subjugated the Pandaren people thousands of years ago. The Zandalari, always trolling the players of WoW with many raids featuring them as adversaries, have resurrected the Thunder King to wreak havoc and retake the isle of Pandaria.

Patch 5.2 is a big one. In addition to the hundreds of class and spell tweaks to help rebalance the game, Blizzard is also adding a new daily quest hub and collectible minipets to its surprisingly addictive battle pet system, among other additions and changes. The major addition which hardcore players will be excited about, however, is the Throne of Thunder raid instance in which 25 elite players can try to defeat the reinvigorated Lei Shin himself. I got a chance to speak to Ion Hazzikostas, the Lead Encounter Designer at Blizzard, and pick his brain on what it takes to design a highly anticipated raid dungeon, keep it challenging for dedicated players without alienating the more casual raiders. Oh, and, Ion also talks a little bit about PVP and how hardcore Arena players really love to collect 'em all.

Raiding the Throne of Thunder

Ion Hazzikostas, Lead Encounter Designer at Blizzard for World of Warcraft: That is correct, twelve bosses plus one additional boss that is only available on heroic or hard mode difficulty.

Greg Tito: Who is the additional boss? Are you going to tell me what it is or is it a secret?

Ion Hazzikostas: Sure, his name is Ra-den. He is a mysterious Titan keeper, evocative of some of the figures that players encountered back in the Ulduar raid in Wrath of the Lich King. He's been locked away underneath the Thunder King's palace for a millennium at this point. Players who defeat the Thunder King on Heroic Mode will unseal this mystery that's lurking beneath the palace.

Greg Tito: Is he working with the Thunder King or is he more of a rogue entity?

Greg Tito: The players will then get to free him and use his power for good and not for evil?

Ion Hazzikostas: Something along those lines. We've been keeping the exact workings a little mysterious since this is kind of a special bonus treat for the first players to get there. We didn't test it on our public testers and there's very limited information available about the boss so it should be a cool surprise for the first people to get there and see him.

Greg Tito: This is kind of similar to, also in Ulduar, where you had an extra special encounter.

Ion Hazzikostas: Algalon, in Ulduar, is very similar to that in terms of the design and the structure.

Greg Tito: How long have you been working on this specific raid instance?

Ion Hazzikostas: Pretty much since the second that we released Mists of Pandaria. In terms of the first concepts, from early October through now. It's a very involved and lengthy design pipeline where we had to figure out exactly what the dungeon is going to be, what the raid is going to be, who the bosses are going to be, what the overall flow is then the overall setting. Then it just needs to get made physically by our awesome artists who actually are making the dungeon itself as well as the creatures that are going to inhabit it and then we start putting all the pieces together and implementing the encounters and then of course testing them so from start to finish it's a number of months but we're really excited about the final product and looking forward to getting it in players hands

Greg Tito: That's actually a pretty compact design schedule. I would have thought that you would have actually started, at least in concept for what this raid would look like, while Mists of Pandaria was being built before release.

Greg Tito: Was there anything that came with the testing or the iteration from the artists that made you change the design as it was going forward?

Ion Hazzikostas: No single big thing that jumps out. I think we constantly ... it's a creative process and everyone has input and we have ideas our artists have awesome ideas of their own and concept sketches and we just kind of bounce around and often they'll have a suggestion for an interpretation of something that we all just agree is, immediately, that's way cooler than what we had in mind, let's go with it. But it's more just about sort of the look and feel of a boss or of a room. The fundamental design and the actual mechanics that are implemented those are constantly iterated on both through internal testing and public testing we'll often realize that something isn't playing out quite the way we intended and maybe it's too easy, maybe it's too hard, maybe players are bypassing it entirely and so we just make adjustments and fine tuning to the way encounters work to make sure that they're fun.

Greg Tito: I saw that this is going to split into four parts for when you're searching for a pick up group using Blizzard's Looking For Raid feature.

Ion Hazzikostas: Exactly. There's four sections with three bosses each. It kind of corresponds to the four separate thematic sections of the zone, the zone was in some regards designed and structured to be broken up that way. The first section are outdoor ruins then at the end of that you plunge into this underground cavern, kind of a forgotten grotto underneath the foundations of the palace that's where the next three bosses are. Then you come up underneath into sort of experimental, dark sinister wing, sort of the dungeons beneath the palace. Then the final section is the seat of power of the Thunder King himself, much brighter more ornate and that's the final three bosses.

Just Who Is This Thunder King Anyway?

Greg Tito: The Thunder King is Lei Shen. What can you tell me about him?

Ion Hazzikostas: He was this figure that had completely conquered Pandaria thousands of years ago and subjugated the Pandaran race and really was the Mogu tyrant when the Mogu were the ascendant power in Pandaria.

Greg Tito: Now why didn't that power expand beyond into Kalilmdor?

Ion Hazzikostas: Because until the Cataclysm and the events following the Cataclysm, the contents of Pandaria was shrouded in impenetrable mists and so there really wasn't much traveling in or out. The wandering turtle on which new Pandaren players begin as the lone exception to that.

Greg Tito: You'd think that with Lei Shin so hungry for power that he would try and get out of the island, too.

Ion Hazzikostas: I guess he didn't get around to it. Ultimately he died of old age his first time around but then was resurrected by the Zandalari trolls in their bid for power in the recent events of the 5.0 patch.

Greg Tito: I remember playing through that quest line. Was that intentional to seed the event of this big raid through a memorable quest line that players did as they were leveling through Pandaria?

Ion Hazzikostas: Yes, it's something we try to do wherever possible, you know when we can plan ahead and know what the next raid zone is going to be or what the next raid boss is going to be. I think it's always cool to introduce and foreshadow as much as possible so that when players go into a place and they fight an enemy, they kind of know who it is. We're not completely having to introduce them from scratch and there's no connection, we try to avoid that.