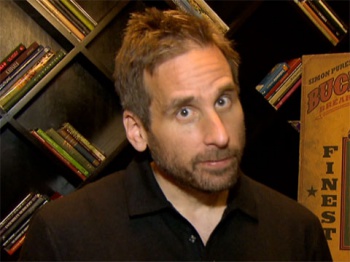 Ken Levine says that when Universal got cold feet about the BioShock film, he chose to pull the plug rather than compromise the project.

Did you realize it's been almost five full years since Pirates of the Caribbean director Gore Verbinski signed on to direct the big-screen adaptation of BioShock? It all started with such promise, before slowly falling apart; Verbinski dropped out in 2009 and his replacement, 28 Weeks Later director Juan Carlos Fresnadillo, departed in 2012. And now BioShock mastermind Ken Levine says he's put the brakes on the whole thing and made it clear that he's not interested in making the movie unless it can be done on his terms.

Levine said Verbinski wanted to make a "hard R film" with "a lot of blood," but Universal got jitter after the R-rated Watchmen failed to become a hit. "The studio then got cold feet about making an R-rated $200 million film, and they said, 'What if it was a $80 million film?' - and Gore didn't want to make a $80 million film," he explained. "They brought another director in, and I didn't really see the match there - and 2K's one of these companies that puts a lot of creative trust in people. So they said if you want to kill it, kill it. And I killed it."

"How many times in life do you not need to compromise? It comes along so rarely, but I had the world, the world existed and I didn't want to see it done in a way that I didn't think was right," he continued. "It may happen one day, who knows, but it'd have to be the right combination of people."

Don't hold your breath, in other words - but really, so what? I don't think the BioShock "experience" is lessened by the absence of a feature film, and I'd far rather remember it as a top-notch shooter with a cool story than as a failed big-screen cash-in. Not everything needs to be made into a movie at any cost, and good on Levine (and 2K) for realizing it.