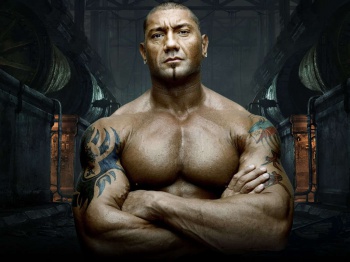 When Marvel's Guardians of the Galaxy film adaptation hits theaters, Drax will be portrayed by former WWE Superstar Dave Bautista.

The Marvel Universe Wiki describes Drax The Destroyer as a former musician killed by the mad titan Thanos. The less mad titan Kronos then resurrected Drax with superhuman strength and incredible resilience, specifically to seek revenge on Thanos.

Wikipedia describes Dave Bautista as a former professional wrestler -- WWE fans would know him best by his ring name, "Batista" -- who is a mixed martial artist, competitive body builder and Hollywood actor. IMDB lists scant credits for Bautista, with his most notable role to date being that of Brass Body in 2012's RZA-directed kung fu throwback flick The Man With The Iron Fists.

What's the link between these two? According to The Hollywood Reporter, Marvel Studios has signed Bautista to portray Drax in the upcoming film based on Marvel's Guardians of the Galaxy superhero team.

The film, which is being directed by James Gunn, won't hit theaters until 2014, but fans have long been arguing over who might portray the green-skinned Drax on the silver screen. Until the Hollywood Reporter story broke, the smart money was on Jason Momoa, the muscular actor who's recently risen to prominence as Khal Drogo on HBO's Game of Thrones television series. Momoa also starred as the titular anti-hero in the 2011 reboot of Conan The Barbarian, so he seemed a solid fit for the heavily-muscled Drax.

While I'm sure there are wrestling fans excited by this news, for most of us it raises more questions than it answers. Those who watched Bautista in The Man With The Iron Fists are aware of his acting talents, or more accurately his lack thereof. In fairness, Bautista is a far better actor than most professional wrestlers who attempt to make the jump to Hollywood, but he lacks the charisma and general purpose appeal of Dwayne "The Rock" Johnson. Then again, the comic book incarnation of Drax serves as a scowling, hulking brute, and in that regard Bautista is a perfect fit for the role.

Still, we can't help but think that Marvel Studios, fresh off the massive financial success of The Avengers, should have been able to find a more competent thespian for the role. There may not be many actors with the necessary muscle mass to portray Drax properly, but we have to think there would be enough of them that a guy like Bautista shouldn't be able to find his way into what will undoubtedly be a huge, tentpole production, likely to pull in hundreds of millions of dollars, if not more.

Then again, we had our doubts about Robert Downey Jr.'s ability to portray Tony Stark prior to the first Iron Man film, and now we can't imagine anyone else in the role. Hopefully Dave Bautista proves a similar happy surprise.

Escapist Podcast - Movies and TV: 013: Shocker, We Talk About Guardians of the Galaxy A LOT Team Hollywood 17 Comments
Comments on