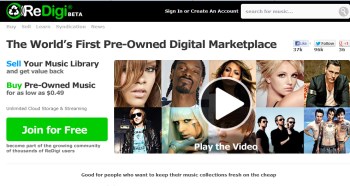 A U.S. federal judge has added a new layer of complication to the business of pre-owned digital content sales by declaring that it infringes on copyright.

I still have a problem getting my head around the idea of "used" digital content, although I recognize that for most practical purposes it's no different than the pre-owned games on sale at your local GameStop. You're taking home a disc and a box, but what you're really paying for is the content encoded therein; everything else is just packaging and, therefore, more or less irrelevant.

Regardless of what you think of it, reselling pre-owned digital material (and "pre-owned" sounds so much better than "used" in this context, so I think we'll try to stick with it) is quickly becoming a thing, which inevitably leads to all sorts of questions and concerns about copyright: who owns it, what can be done with it and of course how to reconcile the inherently-tangible concept of used crap to the ethereal digital world.

U.S. District Judge Richard Sullivan is not doing much to help smooth out the situation. Ruling on a lawsuit brought by Capitol Records against ReDigi, a site that bills itself as "the world's first pre-owned digital marketplace," Sullivan agreed with Capitol and parent company Vivendi that the "first-sale doctrine" does not apply to digital products.

"The novel question presented in this action is whether a digital music file, lawfully made and purchased, may be resold by its owner through ReDigi under the first sale doctrine. The court determines that it cannot," Sullivan ruled.

The stumbling block is that a reproduction of the original digital file is made during the transfer of ownership, which is illegal. "Because the reproduction right is necessarily implicated when a copyrighted work is embodied in a new material object, and because digital music files must be embodied in a new material object following their transfer over the internet, the court determines that the embodiment of a digital music file on a new hard disk is a reproduction within the meaning of the Copyright Act," Sullivan declared.

The ruling leaves the future of ReDigi in question and has wide-ranging implications for the future of digital content resales as a whole. An appeal will almost certainly be made but if the ruling holds up, it means that any site offering pre-owned digital content for sale will require the permission of the original copyright holder - which, in today's climate, isn't likely to be given cheaply, if at all.