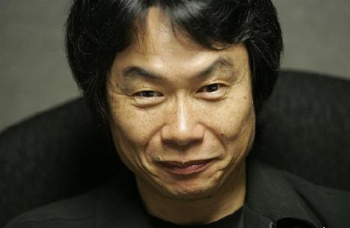 Shigeru Miyamoto on the Wii U's "practical purpose" in the living room.

The Wii U isn't selling particularly well. Even the Dreamcast sold better during its launch window. Some have put this down to the now traditional, no-games post-launch funk that has dogged every Nintendo console since the N64. Others use the slow sales as proof that the console's central gimmick, a second screen built right into the control pad, is right up there with the prohibition and the TV Hat in the big list of terrible ideas. Defenders of the console, including Ubisoft's Xavier Poix, reckon people just need to get their head around the dual-screen concept before it'll start selling. Shigeru Miyamoto (seen above smiling like a super villain) makes a similar argument, going as far as to compare the Wii U to the DS (which just so happens to be the best-selling console in history as of December last year).

"There was a period when we first released the Nintendo DS that people would say there's no way people can look at two screens at once," he told CNN.

"I almost feel like, as people get more familiar with Wii U and these touchscreen interfaces, that there is going to come a point where they feel like 'I can't do everything I want to do if I don't have a second screen'," he continued.

"I feel a device like Wii U, with its ability to continue to offer new features and that network connection and the connection to the TV and the interface, really makes it feel that it's more than just a game machine, but something that offers a lot of practical use and practical purpose in the living room."

To play devil's advocate; the big difference between the DS and the Wii U (obvious jokes about the size of their libraries aside) is that the DS' twin screens are right next to each other, while the Wii U's screens require me to either hold the controller in front of my face or glance down every few seconds. The end result is that playing Wii-pad enabled games requires constant head bobbing. It's like attending an imaginary Pantera concert, only without the sweet riffs.

That being said, we go through this "Nintendo is dooooooomed!" song and dance with every new console, and it inevitably ends the same way; Nintendo gets around to releasing a proper Mario/Metroid/Zelda game, sales pick up and the cycle continues. While the Wii U might not repeat the wild success of its predecessor, it's unlikely that it'll be the end of Nintendo.