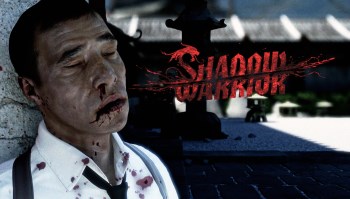 Flying Wild Hog, the team behind Hard Reset, appears to have decided that it does in fact want some Wang.

A quick lesson for you young whippersnappers out there: In 1997, 3D Realms released Shadow Warrior, a very Duke Nukem-like shooter starring a mighty ninja named Lo Wang. It was actually a really good game but it never saw a sequel, probably because an awful lot of gamers found it patently offensive; 3D Realms claimed it was a satirical send-up of cheesy kung-fu movies but... well, Lo Wang. It only went downhill from there.

Strip away the racial stereotyping, however, and you were left with a very solid game, which may be why it looks like we are finally, all these years later, getting a sequel. Or, more likely, a reboot, hopefully one that doesn't leave a large segment of gamers appalled by its tone-deaf "humor."

Hints of a new Shadow Warrior first came to light a couple days ago on the YouTube channel of Devolver Digital, best known for the antics of its oversexed chief financial officer, Fork Parker, and for publishing games like Serious Sam3: BFE and Hotline Miami. The "Blade Analyzer Pro," which is also on Steam Greenlight, is "the latest consumer software product from Zilla Enterprises... designed to identify and catalog all manner of swords, knives and other blades of historical significance." Zilla was the Big Bad of Shadow Warrior, who sought to conquer all of Japan at the head of his powerful corporation Zilla Enterprises.

Further, the website shadowwarrior.com, and the shadowwarrior.devolverdigital.com sub-domain, both now contain images of what appears to be a Japanese shrine or temple, and digging a little deeper, you can find a copy of the same image but with a dead Yakuza. Oh, and it says "Shadow Warrior" on it, too. So, yeah, pretty big hint there.

Speaking of hints, it seems that the new game is being developed by Flying Wild Hog, a fact I managed to put together by noticing the FWH logo in the Blade Analyzer Pro video, and also the presence of the studio's logo on the Shadow Warrior website. Bit of a leap of logic there, but that's just how I roll.