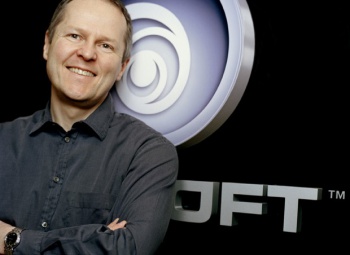 After eight years with this generation, Ubisoft bets gamers are hungry for more.

The Wii U is already in homes, the PlayStation 4 is on the horizon, and the successor to the Xbox 360 is almost certainly going to be announced in a mere five days: the next generation is upon us. The anticipation levels for the upcoming batch of consoles have been mixed - many developers and consumers alike are eager for the power that the new systems will bring, while others are concerned that the industry doesn't need to push out new consoles just for new consoles' sake. Publishing titan Ubisoft is firmly in the first camp, claiming that the above-average lifespan of the current console generation has left hardcore gamers "starving" for new platforms to throw their money at.

CEO Yves Guillemot believes that Sony and Microsoft's new platforms will tap into the current demand for limitless expression. "We live in a world of self-expression," he says. "Customization, or curating, is a huge growth area across all services and that holds true for games. People want to play in their own way, they want to define their own experience and they want to share the way they're playing."

Ubisoft sees a lot of opportunity in the new console generation, particularly in the rise of social connectivity among gamers. The idea is that more players being more connected will lead to a higher average revenue per user. Many gamers have been less than optimistic about the trend of social features, but Ubisoft's newly revealed marketshare figures seem to indicate that the publisher knows what it's doing. Ubisoft is currently the third largest games publisher with a marketshare of 11.2 percent, coming in behind Activision Blizzard (19.5 percent) and EA (18.4 percent). Nintendo is close behind with a marketshare of 10.8 percent.

There's still plenty of details we don't yet know about the next generation of consoles - heck, Microsoft still hasn't let out any official details about the next Xbox, and some of the fears about Sony's social integration ideas have cooled down with the announcement that the PS4 won't need to be always online. We'll find out how hungry the gaming masses are when the new consoles hit shelves.