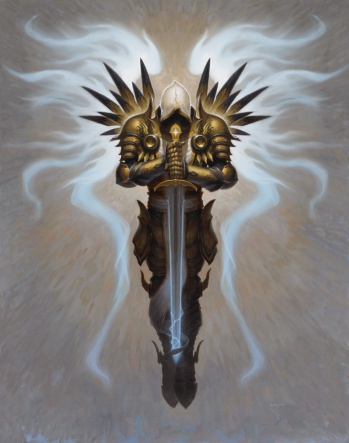 Blizzard Entertainment is joining forces with Insight Editions to deliver another book focused on the backstory of Diablo III, the upcoming Book of Tyrael.

Despite its noisome detractors, the Diablo franchise is now solidly one of gaming's most revered. When a developer can all but guarantee 5 million units sold within the first few weeks, you know they have a massive hit on their hands, and that's apparently the point at which gaming firms opt to merchandise the stuffing out of whichever property the public has momentarily glommed onto.

Thus, Blizzard Entertainment has joined forces with publisher Insight Editions to bring you the upcoming Diablo III: Book of Tyrael. Hardcore fans of the series may recall that a giant tome dubbed Diablo III: Book of Cain hit shelves shortly prior to the debut of Diablo III, and featured an in-depth look at the fiction behind the game from the viewpoint of series mainstay Deckard Cain. The Book of Tyrael is a similarly weighty tome, but it focuses on the archangel Tyrael, and offers players an insider's look at the world of Sanctuary from his glowing, winged point of view.

Officially, the book is described thusly:

Diablo III: Book of Tyrael takes players even further into the universe with a detailed and beautifully crafted book of lore as seen through the eyes of Tyrael. As a former archangel of the High Heavens, Tyrael ranks among the most important and influential characters in the Diablo franchise. Here, in this illustrated and comprehensive tome, he reveals never-before-known secrets about the history of the world, the dark threats that yet face mankind, and his decision to join the ranks of humanity as a mortal. In Tyrael's own words, "Forevermore we shall stand together, angels and men, in the light of this glorious new dawn."

While this insight into the backstory of Diablo III is very welcome, at least half the draw of the Book of Cain was in its gorgeous illustrations, the sort of images you only find in concept artwork, except more fully fleshed out and featuring a greater degree of detail. The Book of Tyrael continues this tradition, and is described as featuring "stunning original art throughout."

The 148-page book is currently slated to hit store shelves on October 1, 2013. As of now the only version of the book planned is a hardcover edition which will be priced at $40.