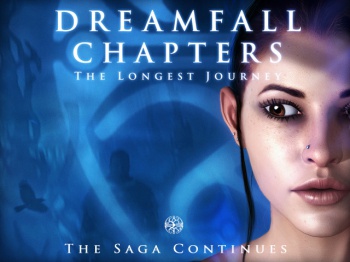 Ragnar Tornquist believes that gaming already has its own equivalents to Titanic.

Earlier this month, George Lucas and Steven Spielberg took time during a USC panel to discuss the future of videogames. While both directors expressed high hopes for the medium, neither seemed to believe that games have a great deal of emotional depth. Lucas even suggested that when players pick up a controller, "something turns off in the heart, and it becomes a sport", predicting that it will take another five years for gaming discover its own Titanic. These comments have rather annoyed Ragnar Tornquist, director of Dreamfall Chapters and an industry veteran of nearly 20 years. At a Rezzed 2013 panel on game storytelling, Tornquist explained that mainstream titles like Journey and The Last of Us already deliver emotional experiences, and should be recognized alongside mainstream film.

"Games are where storytelling is being experimented on the most," Tornquist explains. "Take Journey, one of the best games I've ever played - it tells an amazing story through pictures and sound that you just wouldn't see in a TV show.

"It made me so angry because I'm currently playing The Last of Us... I'm not going to spoil anything - but the beginning of the game sets up this great emotional connection... The controller turns on and your heart does not turn off. You feel desperate."

While I don't think Lucas meant to disparage gaming, Tornquist isn't wrong. In the past year alone, we've seen several mainstream games succeed as both critical hits and emotional experiences. Sure, we have flops, but between The Last of Us, The Walking Dead, and even BioShock Infinite, games are quickly becoming as capable of connecting with audiences as film. And personally, I enjoyed those games a lot more than sitting through Titanic.