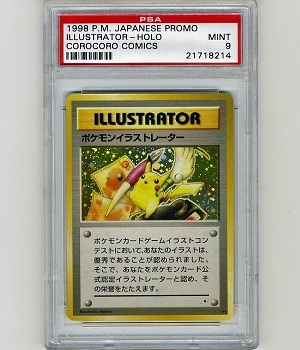 Scott Pratte believes he'll be able to sell his rare Pikachu Illustrator card for at least $50,000.

There was a brief period of time where I played the Pokemon collectible card game. While the passage of time has left most of my memories of it in a fairly vague state, one thing that I can remember is that the cards were pretty much slips of card stock with pictures printed on them. That in mind, eBay user Scott Pratte apparently owns the rarest slip of card stock there is and he wants $100,000 for it.

Granted, that's only the Buy it Now price listed on eBay, and one that even Pratte knows he's unlikely to reach. That being the case, he apparently believes that he'll be able to sell the rare collectible for at least $50,000. As high as that might sound, one interested buyer has apparently already offered as much as $47,000 to buy the card.

At this point you're probably wondering what card could ever merit that kind of money. In this case, it's a Pikachu Illustrator card. Distributed as a promotional reward for the 1997 Pokemon Card Game Illustration Contest, only six were ever produced and it's considered by many collectors to be the rarest Pokemon card in existence. In the past it's been estimated to be at least $20,000 in value. Pratte's Trainer, in turn, has been graded to be in mint condition by the Professional Sports Authenticator, substantially boosting its value. With nine days left in his eBay auction, he's thus far received 450 offers. Who the eventual buyer is and how much they wind up paying in the end is something we'll definitely be interested to see.

Non-Player Counselor: Ash Will Never Catch Them All Firefilm 12 Comments