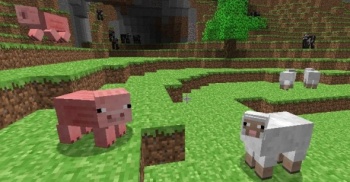 Twitch continues its takeover of the world, one block at a time.

About the only thing harder than explaining the appeal of Minecraft to non-gamers is explaining the appeal of watching people play Minecraft. It's little wonder that a game built around creativity has also spawned an entire subcategory of videos. While some simply record play sessions, others use it as the basis for elaborate music videos. Now, Mojang is partnering with Twitch to build streaming right into Minecraft, so players can better broadcast their exploits to the world.

The new feature will be built right into the Mac and PC clients, allowing for seamless streaming. No date has been given for the integration, only that it's expected soon. Personally, I'd rather be required to craft a special "Twitch Camera" out of diamonds, netherrack, and iron, just to keep the immersion going, but I'm sure there will be a mod for that too.

This is only the latest step in Twitch's domination of the streaming scene. The service is a standard in gaming, especially in E-Sports titles like League of Legends and Starcraft 2. Even the upcoming Xbox One and Playstation 4 will have native support for Twitch. Just a few days ago, they took in $20 million dollars in investment, some from major game publishers. The future is here, and it will be livestreamed.

Movies and TV: What to Watch this Weekend: Planet of the Apes, Emmy Nominees harpere 0 Comments