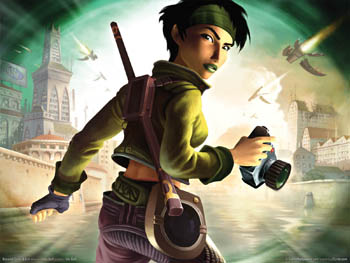 Ubisoft is known for big series like Assassin's Creed, Far Cry, and the upcoming game Watch Dogs. The AAA studio makes big games with a lot of money. Profits are important, and despite the love a dedicated group of people have for Beyond Good & Evil, Ubisoft calls it a mistake. When creative director Patrick Plourde pitched his personal project Child of Light, a future title with RPG and platforming elements starring a young girl in a coming-of-age story, Ubisoft was wary of a game that wouldn't bring success. Ten years have passed, and Beyond Good & Evil still weighs heavily on Ubisoft's mind.

Beyond Good & Evil is an action adventure game released in 2003. The player controls Jade, an investigative photographer working in a resistance movement to reveal a conspiracy. The game scored well in reviews but did not sell well. Ubisoft wants to stick to safer guarantees of financial returns seen in popular franchises like Assassin's Creed. Convincing Ubisoft management to take a chance on a smaller title is tough work, but Plourde managed to do it.

Referencing games like Journey, Bastion, and Limbo as examples of indie games with high returns, Plourde persuaded Ubisoft Montreal to take on Child of Light. Plourde says Ubisoft Montreal greenlit the game because he has some pull in the company and knew what management needed to hear. He recommends developers to go indie when they have an idea that a large studio doesn't want to pursue.

"If somebody tries something and fails, there are going to be repercussions for other people," Plourde said. "I don't think people are malevolent or evil about that. It's just if it fails, they're going to be careful greenlighting other projects like that."

Related to:
carly smith, beyond good and evil, child of light, ubisoft
0
Tweet

Gallery of the Day: 8 Great Ubisoft Games That Prove That They Aren't All That Bad DrStrangelove 20 Comments