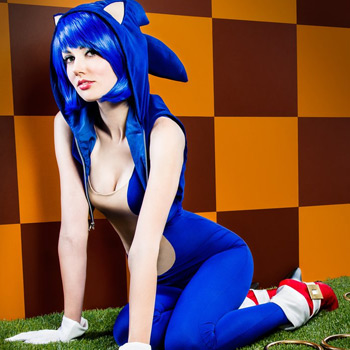 Sonic the Hedgehog has been reimagined as a seductive temptress.

Manzi DeYoung is a cosplayer from California who apparently specializes in sucking all of the innocence from my childhood memories. Last week, she posted several pictures of a newly completed Sonic costume that made me think differently about my Sega Genesis.

"This is absolutely the most ridiculous costume I've ever made and I'm glad everyone seems to be enjoying it!" she said in a recent Facebook post. "I'm also proud of the amount of people who are appropriately appreciating the tongue-in-cheek-ness of this entire concept. 'Sexy' versions of unsexy characters is one of the most entertaining costume gimmicks in my opinion."

As wardrobe stylist, Manzi has been involved in a number videogame-related projects. Last October, Corridor Digital released The Devil's Spear, an Assassin's Creed 4 fan film. Manzi created many the film's costumes, and they are genuinely impressive. She also worked on a dozen costumes that were used during PS4 launch events in San Francisco and New York city.

I'm anxious to see which of my innocent childhood memories Manzi decides to violate next.