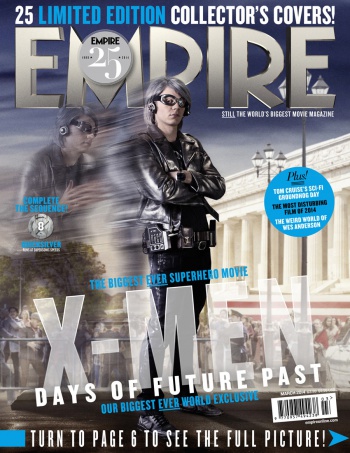 X-Men: Days of Future Past's Quicksilver and Sentinels are prominently displayed on covers for this month's Empire magazine.

X-Men: Days of Future Past is shaping up to be the biggest X-Men movie of the franchise, for better or for worse. This means it will not only unite the original and First Class casts, but introduce new characters to the film universe, including Bolivar Trask and Magneto's son Quicksilver. Now we're finally getting our first look at everyone in their new costumes, all revealed via a series of covers for Empire Magazine.

Empire is unveiling a total of 25 costumes throughout the day, but so far there are 9 to sink our teeth into. Outside of a good look at the Sentinels and young Magneto's new costume, Quicksilver is prominently displayed for the first time in goggles, a utility belt, and leather jacket. Speaking of goggles, Toad's binocular appendage is a noticeable change from his last appearance, while Stryker, Mystique, Beast, and Peter Dinklage's Bolivar Trask round off the collection.

Personally, I'm not sold on a lot of the new looks, except for Michael Fassbender's fantastic Magneto costume. In particular, the Sentinel design isn't especially threatening, and Quicksilver doesn't seem to have much personality beyond his leather jacket. That being said, the bigger concern is whether all these actors and personalities will mesh their performances across two timelines, which would make any costume concerns a moot point.

More covers should be posted later today, but in the meantime, what do you think of the new characters and costumes?