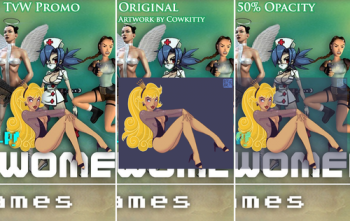 Blogger "Tammy" claims Sarkeesian stole her image of Princess Daphne to use in her Tropes vs. Women Kickstarter logo.

By now, I'm pretty sure I don't need to tell you guys who Anita Sarkeesian is. But, just for a quick recap, she started the Tropes vs Women in Videogames Kickstarter, which aimed to explore sexism in videogames, raised a boatload of money, and then made some videos that some backers strongly disagreed with, crying "scam". Well, now she's back in the controversy spotlight, as Blogger "Tammy" from CowKitty.net is claiming Sarkeesian stole her image of Princess Daphne to use in her Tropes vs. Women Kickstarter logo.

"Long Story Short: You stole my art, used it for commercial purposes, and won't even respond to my polite inquiries," claimed Tammy in a blog post entitled "You Stole My Artwork: An Open Letter to Anita Sarkeesian." If you'll look to the right, you'll see the image in question, making it very obvious that it is indeed Tammy's picture being used in the Tropes vs. Women logo.

Copywright law is kind of a gray area in this case, as Tammy obviously doesn't own the rights to Princess Daphne (a character from Dragon's Lair) as her image is just fan-art. Sarkeesian, and later, her Feminist Frequency producer Jonathan McIntosh did eventually respond to Tammy's letter, but claimed that a "remixed collage is transformative in nature and as such constitutes a fair use of any copyrighted material as provided for under section 107 of the US Copyright law." Sarkeesian also claimed that all Feminist Frequency projects are non-profit.

Tammy responded noting, "Even if this was a legal example of Fair Use (It's not), it wouldn't mean that the theft was ethical or moral. It's exploitative and unfortunately marginalizes content creators", and kindly asked again for valid proof of non-profit status.

This is a messy situation, and at this point it doesn't look like it will resolve itself peacefully.