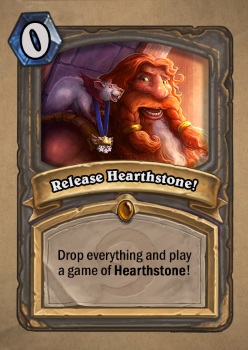 Hearthstone, Blizzard's free-to-play strategy card game, is out of beta and full speed ahead.

Surprise! It's Tuesday, and Hearthstone is live! The unexpected news came from out of nowhere, as Blizzard flicked the switch on the game on a day during which everyone else was busy playing and talking about Titanfall and Dark Souls 2.

Oddball timing notwithstanding, the beta is done and now Hearthstoners (yes, that's what I'm going with) everywhere can jump in on the action, beginning with introductory missions against Warcraft characters like Millhouse Manastorm and Lorewalker Cho and then moving on to casual and ranked play, arena matches and more.

And what's a new game launch without a huge day-one patch? Blizzard has that base covered too, with Hearthstone v1.0.0.4944. The update allows players to earn a "Golden Hero" by winning 500 Ranked matches with any given hero, after which it will be given a gold border, an animation and a "golden animated Hero Power." Taking part in Ranked Play seasons will now provide players with new card backs at the end of each season, and Ranked Play itself has been changed to award players "bonus stars" that reflect their performance after each season wraps up.

The patch also fixes numerous bugs, implements a couple of balance tweaks and adds a few new features, including an auto-reconnect option that gives players a 60-second window to log back into a game and continue playing if they're disconnected. A full breakdown of what's been changed is up on Battle.net, and if you don't particularly care about any of that and just want to start playing, you may do so now at playhearthstone.com.