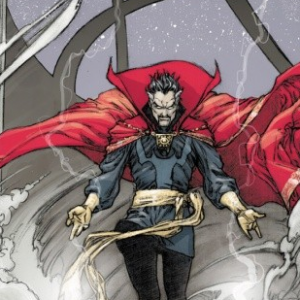 The hoary hosts of Hollywood are very close to picking the person who'll bring Marvel's master magician to theaters.

You can tell Marvel is absolutely convinced that by the time Avengers: Age of Ultron comes out it will be able to just print money, because it is not kidding around about developing characters no one ever thought would make to film, much less appear in their own movies. The test run is of course going to be Guardians of the Galaxy, but we all know that's going to blow up like the Death Star, which means come Marvel Phase 3 we're getting Ant-Man and Doctor Strange. And all will be right with the world.

Speaking of Doctor Strange, The Hollywood Reporter's Borys Kit tweeted an update yesterday to what he claims he's been told is the short list to direct the Master Magician's movie: Scott Derrickson of Sinister and Exorcism of Emily Rose is definitely in the running. He also confirmed that Warm Bodies director Jonathan Levine and Brave director Mark Andrews are still possibilities as well. THR previously also named Welcome to Yesterday director Dean Israelite and A Royal Affair director Nikolaj Arcel, though Kit didn't mention the duo yesterday.

To be honest, this list doesn't exactly fill me with the confidence I felt when Shane Black was announced as director of Iron Man 3 and James Gunn was tapped to helm Guardians. True, Mark Andrews sounds like a very interesting choice, but remember that the praise he gets in the wake of Brave ought to be tempered by the knowledge that he only took over about halfway through, after the film's original director, Brenda Chapman, was forced to step down under murky circumstances. I'd bet real money that everything good about that film was good before he stepped in, particularly given how weirdly uneven it ended up being, especially once the second half turns into a completely different movie.

Jonathan Levine also leaves me feeling lukewarm. Warm Bodies is the recipient of far more love than that rather tepid movie deserves, and I imagine it will be largely forgotten 5 years from now. My cattiness aside however, I do think Scott Derrickson is an interesting candidate. Emily Rose is tonally very close to the weirdness and horror underpinnings of Doctor Strange. While I love the lightly comic tone of the the Marvel Cinematic Universe so far, a Doctor Strange movie is begging for an Aleister Crowley bent, and while I don't want it to be a humorless pile of DC comic book movie emo, something close to the first issue of Neil Gaiman's The Sandman sounds just right to me. Albeit with the sorcerer as the hero instead of the villain.

Then again, who am I kidding? What I really want is a movie about "Dr." Byron Orpheus. Which is to say, The Venture Bros. need to return with haste.

What do you think about this list? Sound off in comments, and be sure not to awake the dark powers.