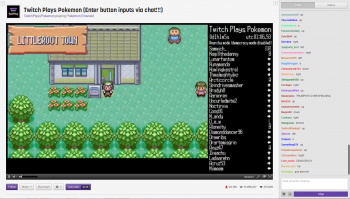 The third generation of Twitch Plays Pokemon has kicked off, and this time, the trainer is a girl.

While viewership faltered a little with Pokemon Crystal, Emerald seems to be drawing in some crowds again (at least at the start), with the current viewership hovering around 30,000 "players". Still a far cry from Pokemon Red's 100k+, but still pretty impressive.

Long-time fans of the series will notice that the game's "Democracy mode", which was first introduced as a mode that could be "voted in" in Pokemon Red, and then was set on a timer for Crystal, has actually been disabled on Emerald. Whether this is good or bad has yet to be seen, although it is worth noting that, at time of writing, it's been over an hour and we haven't even picked our starter...

The stream's creator says that no romhacks or codes are being used, though here's hoping he has inserted some custom content into the game, like how the Red we faced in Crystal used the same team from Twitch Plays Pokemon Red.

Check out the stream right here.