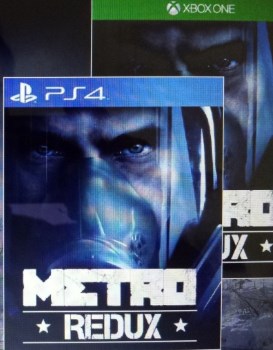 Deep Silver says Metro Redux is real, and it will be more than just a re-release of old shooters for new consoles.

Word of something called Metro Redux started making the rounds yesterday after a pair of images appeared on an Italian gaming forum promising enhanced versions of Metro 2033 and Metro: Last Light, as well a soundtrack, art cards, limited edition packaging and a day-one DLC token. Today, publisher Deep Silver made it official - sort of.

"Metro Redux. You may have heard of it... even though you probably shouldn't have!" it said in a message posted on Enter the Metro. "We could issue a 'We do not comment on rumor and speculation' statement and pretend this never happened. They're pretty boring to read. They're also pretty boring to write. So we're going to comment on rumor and speculation instead. Is Metro Redux real? Yes."

The message also states, however, that the leaked images come from an old planning presentation and contain "a lot of hypothetical ideas and placeholder material," including art from the original Russian Metro 2033 novel as the box cover and a logo that simply uses "Redux" in place of "2033." And while it's great that Deep Silver isn't playing the "no comment" game - and I'll just take a moment here to state that I really dig how Deep Silver does business - it's not quite ready to say anything more about it.

"We think the reality is a lot more exciting than the out-dated material that got leaked shows, and we're itching to share it with you," the message states. "Just not yet."

A full and proper Metro Redux announcement will be made sometime prior to E3.