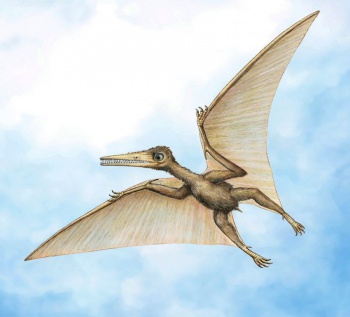 Named the Kryptodrakon progenitor, fossils unearthed in China have been determined to be the oldest known pterodactyl.

Fossils for the Kryptodrakon progenitor were initially discovered in 2001 and misidentified as a two-legged dinosaur; it was only years later that they were determined to be the oldest known pterodactyl. James Clark, co-author of a study published April 24 in the journal Current Biology, said that he looked at the fossils and said, "That's not a theropod; that's a pterosaur."

With a wingspan of 4.5 feet, the Kryptodrakon lived in the Jurassic period 163 million years ago. Its Latin name is inspired by the movie Crouching Tiger, Hidden Dragon, because its fossils were found in China's remote Shishiugou Formation, a "dinosaur death pit," in a desert where the movie was filmed.

Pterosaurs were a group of flying reptiles that went extinct 66 million years ago and include pterodactyls. Little is known about the origins of pterodactyls due to the fragility of their bones, so this new study "will be one of the most important papers on pterosaurs to come out this year," said Gareth Dyke, a vertebrate paleontologist at the University of Southampton in the U.K. who wasn't involved in the research.

Mark Witton, author of the 2013 book Pterosaurs, described Kryptodrakon as "an exciting and welcome new piece of the [pterodactyl evolution] puzzle."