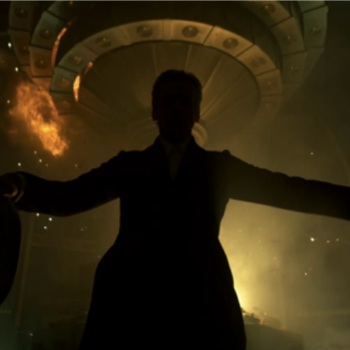 Peter Capaldi will begin his run as everyone's favorite Time Lord this August.

Though we've seen a few glimpses of Peter Capaldi as the Doctor, we finally have a date for when we'll get to see Capaldi running the show in season 8. As we might expect from something as timey-wimey as Doctor Who, the date isn't exact, but a new teaser trailer promises an August premiere. The 15-second trailer gives us the briefest possible glimpse of the new Doctor with the TARDIS appearing to explode around him. Does this mean we'll see another TARDIS redesign in season 8? Though the show does love to shake things up with each new Doctor, we'll have to wait until August to find out for certain.

We expect another 13 episode season - if the series follows its typical 12 episodes plus a Christmas special format - featuring Capaldi as the Doctor with Jenna Coleman continuing as Clara Oswald. We'll also see some faces old and new, including the return of Madame Vastra, Jenny Flint and Strax along with the addition of Danny Pink (played by Samuel Anderson) as one of Clara's co-workers.

August is still a long ways off, but if you just can't wait Humble Bundle is currently offering a great Doctor Who comics bundle that will help you while away the hours before the Doctor returns to your television screen once more.