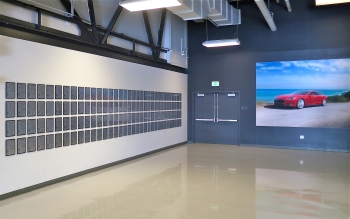 Electric vehicle designer and manufacturer Tesla Motors has opened up its patents to anyone who wants to use its technology "in good faith".

Tesla Motors CEO Elon Musk announced today that the electric vehicle company was adopting an open source philosophy towards its patents. Musk hinted at the possibility of opening up some patents earlier this month, when he announced that the company is willing to share its charging and adapter specifications with other companies interested in using its network of superchargers. "Tesla Motors was created to accelerate the advent of sustainable transport," says Musk. "If we clear a path to the creation of compelling electric vehicles, but then lay intellectual property landmines behind us to inhibit others, we are acting in a manner contrary to that goal. Tesla will not initiate patent lawsuits against anyone who, in good faith, wants to use our technology."

"Yesterday, there was a wall of Tesla patents in the lobby of our Palo Alto headquarters," says Musk. "That is no longer the case. They have been removed, in the spirit of the open source movement, for the advancement of electric vehicle technology."

Musk says that at his first company, Zip2, he avoided patents whenever possible. "At Tesla, however, we felt compelled to create patents out of concern that the big car companies would copy our technology and then use their massive manufacturing, sales and marketing power to overwhelm Tesla. We couldn't have been more wrong. The unfortunate reality is the opposite: electric car programs (or programs for any vehicle that doesn't burn hydrocarbons) at the major manufacturers are small to non-existent, constituting an average of far less than 1% of their total vehicle sales." Musk hopes that by sharing Tesla Motors' patents, more manufacturers will choose to develop electric cars and join the market. More electric vehicles would help reduce the amount of gasoline fuel used, and the resulting greenhouse gas emissions. The United States Environmental Protection Agency reports that 27% of the greenhouse gases produced by the US come from transportation.