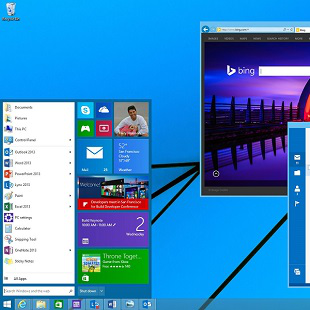 The next version of Windows is expected to bring renewed focus to the traditional desktop.

Microsoft is still hard at work putting together another update to Windows 8.1, but the farther future of its operating system is still in the crosshairs.

ZDNet, ever the fantastic resource for Windows news, has new information on "Threshold," the project that will eventually become Windows 9 (or hopefully Windows Vista 2: Vista Harder).

Threshold will bring a renewed focus to desktop users, or rather Windows users who aren't using a touchscreen to navigate.

The device type that Windows 9 is installed on will dictate the operating system's behavior upon startup. The phone/mobile version of Win9 will not have a Desktop mode, but will retain some desktop/PC features (like side-by-side apps). OS SKUs for hybrid devices, like the Lenovo IdeaPad Yoga line, will be able to switch seamlessly between the touch environment and a desktop.

Windows 9 installed on traditional PCs will boot directly into the desktop you all know (and probably love), while not having access to the touch environment. This version will also have the redesigned Start Menu, which has been a feature sought by Windows users since Win8 first shipped to consumers in October 2012.

All of this is coming in Threshold/Windows 9, which is expected in 2015. A preview (beta?) of the OS is expected later this year, some time after 8.1 Update 2 is delivered in mid-to-late August. Windows 8.1 Update 2 won't have much for desktop users to cheer for; a UI change here, an optimization there, but the mouse and keyboard crowd will likely be unimpressed.