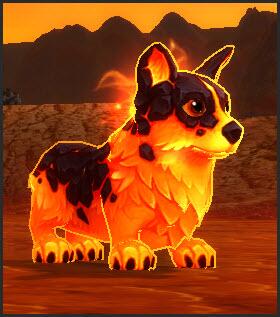 The newest addition to the WoW pet menagerie sets the internet on fire.

For fans of World of Warcraft, there are already plenty of reasons to eagerly wait for the new expansion, Warlords of Draenor. There's the visual makeover being given to the game's races, the introduction of customized garrisons, and a whole new planet and timeline opened wide for exploration. But all of that pales in comparison to the game's latest addition. No, your eyes haven't deceived you. That is, in fact, a molten corgi.

The upcoming pet was announced in a tweet by Blizzard Senior Game Designer, Jonathan LeCraft, who posted the screenshots of the fiery, four-legged friend. Not wanting to get 'burned' by some cruel prank, fans immediately questioned the legitimacy of LeCraft's post. LeCraft followed up on the post with a response, stating, "Of course the Molten Corgi is going to be a real pet! Joking about something like that is a great way to get assassinated."

No word yet on how players will be able to get their hands on the insanely adorable companion yet. It may end up being a pre-order bonus, a quest reward, a purchase through the Blizzard Store, or something else entirely. Regardless, WoW fans have responded to the news like Pavlov's dog, eagerly salivating over the chance to take their new blazing beast for a walk through the countryside of Draenor.