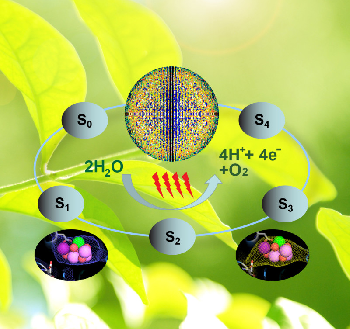 The photo taken reveals the chemical process as it splits water into electrons, protons and oxygen.

While developing an "artificial" leaf to study alternative methods of energy production, the Arizona State University's Center for Bio-Inspired Fuel Production (Bisfuel) has taken the first pictures of photosynthesis in action. Photosynthesis is, of course, the chemical process conducted by living organisms to convert light energy into fuel that can be used to power other biological functions. "This study is the first step towards our ultimate goal of unraveling the secrets of water splitting and obtaining molecular movies of biomolecules," said Petra Fromme, the senior author of the new study.

The photo was achieved by using an X-ray laser to record snapshots of molecules as they split in the reaction- a method know as X-ray crystallography. In photosynthesis, oxygen is created at a metal site, which contains a cluster made up of four manganese atoms and one calcium atom. This cluster is the site that drives the light-driven process of water splitting. According to the study, it takes four light flashes to split one oxygen molecule from two water molecules. The X-ray bounces off the materials projects a picture.

"The trick is to use the world's most powerful X-ray laser, named LCLS, located at the Department of Energy's SLAC National Accelerator Laboratory," said Fromme. "Extremely fast femtosecond (10 -15 second) laser pulses record snapshots of the PSII crystals before they explode in the X-ray beam, a principle called 'diffraction before destruction.'" However, Fromme believes there are two drawbacks to gleaning structural and dynamic information on chemical processes by using traditional X-ray crystallography: the photos obtained are static and X-ray damage affects the quality of structural information. Ultimately, researchers want to record movies on a molecular scale of water splitting during photosynthesis.

Tell us what you think in the comments.

Check out other science and technology news stories and articles on The Escapist's Science & Tech channel!