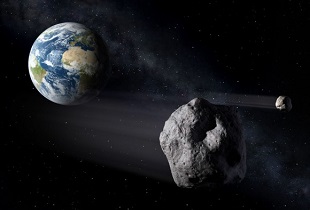 Want to see an asteroid this weekend? Well aren't you in luck! Turns out that "2014 RC," a rock the size of your average Colonial McMansion, is going to pass right by our heavenly body on Sunday night.

The asteroid will pass within 22,000 miles of Earth, putting the rock inside of the geosynchronous satellite ring. The majority of satellites orbit Earth at this range, including communications satellites, and weather-monitoring hardware.

"While this celestial object does not appear to pose any threat to Earth or satellites," says NASA on its Asteroid and Comet Watch page,"its close approach creates a unique opportunity for researchers to observe and learn more about asteroids."

Sadly, NASA says 2014 RC won't be visible to the naked eye, but basic telescope hardware should make the rock viewable (amateurs included). Furthermore, it will be at its closest on Sunday afternoon (2:18pm EDT), and will be in the vicinity of New Zealand. Kiwi readers better have camera-equipped telescopes at the ready, so help me...

2014 RC was originally spotted just this past month, originally by the Arizona-based Catalina Sky Survey, then independently verified by the Pan-STARRS 1 telescope in Hawaii.