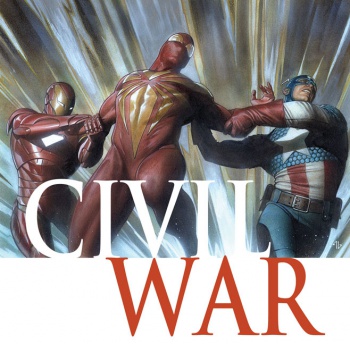 A big Marvel Comics event will kick off with Civil War #1 in the summer of 2015.

Marvel Comics will be retreading familiar ground next summer when it launches Civil War #1. Announced just minutes ago with just a cover image, there's no other information to go on--all we know is that it's coming in 2015 and some of the most prominent superheroes of the MCU will be involved.

The image shows Iron Man and Captain America tugging on either side of Spider-Man, which echoes the events of Marvel's last Civil War--as does Spidey's costume. The first Civil War Marvel crossover series took place throughout 2006 and 2007, tying into many of the publisher's ongoing series. It revolved around the United States government's Superhero Registration Act, which forced characters like Captain America and Iron Man to reveal their identities or risk becoming outlaws.

It's not clear why this was announced this afternoon via email and not during one of the many Marvel panels at last weekend's New York Comic Con. With almost nothing to go on, all we can do is wait for Marvel to release more information.