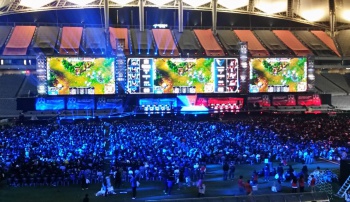 Samsung White took home the summoner's cup after only losing a record two games throughout the entire World Championship.

Imagine Dragons opened the League of Legends World Championship Grand Final with a live performance of their single: Warriors, complete with the song's video clip playing on the stadium's gargantuan screen, and pyrotechnics rounding out the pounding bass. Then, when China's best, Star Horn Royal Club and Korea's finest, Samsung White walked out onto the stage, 40,000 fans cheered for their favorite players, clapping their thundersticks as their "warriors" took to their computers for the biggest esports event of the year.

The hype surrounding the event was just huge, from the cosplay contest in the grounds outside, to the hour-long queues in front of Riot's famous merchandise stands, to the aforementioned Imagine Dragons opening ceremony. The professionalism and scope of the Grand Final gets almost comically bigger ever year, as Riot told us that they had completely sold out all 40,000 seats in South Korea's World Cup Stadium - making this year's event over three times the size of last year's final at Los Angeles' Staples Center.

From the group stage to the quarterfinals to the semifinals, everything had been building up to this, and the two teams left standing at the end of it all seemed poised to fight each other to the bitter end.

Although, quite a few of us were worried that the "bitter end" might be a wee bit before 7pm, as SSW came out of the gates completely guns blazing, and systematically destroying SHRC in the first game, now allowing them to gain even an inch. This game proved that SSW simply becomes a monster if not stopped in the early game - they will take the tiniest of advantages and allow it to snowball into an avalanche.

The second game started off a lot more in SHRC's favor, as they actually had a decent team composition, and played a great early game. Unfortunately, a poorly played teamfight in bottom lane led to SSW taking a single extra kill from SHRC, and as its showed in the previous game, that minuscule advantage was all it needed.

At this point, we were getting ready to pack up and go home, in what was shaping up to be the fastest Grand Final in League of Legends history. But then, something happened. That's right. Rammus!

A pocket Rammus pick from SHRC's jungler InSec, along with Uzi really showing up with his Tristrana, they finally managed to out-play SSW nearly the entire match, and take a game from the unstoppable Korean force. It's worth noting that before this loss, the only other game SSW lost throughout the entire World Championship was to Team Solo Mid in the quarterfinals.

But then it seemed that SSW decided that playtime was over, as another pocket pick from InSec (this time, Pantheon), was completely countered by SSW's Jungler, DanDy, who seemed to be everywhere on the map, all the time. This match more closely resembled the first game, as SSW quickly cleaned up their opponent to take home the Summoner's Cup.

While the Grand Final itself may not have been the close-fought spectacle the pyrotechnics and production values hoped it to be, lets not forget just how incredible of a series this was. There was that incredible, 72-minute nailbiter between OMG and Fnatic. There was Imp's two Pentakills. There was OMG's 3-0 sweep of NWS.

And of course. Who could forget KaBum, taking a win from Alliance and effectively knocking them out of the tournament. I know the European fans will be thinking about that one for a while...

What have been your favorite moments from the World Championship this year, and what are you hoping to see in the next season?

Travel accommodations to South Korea for the World Championship Grand Final were paid for by Riot Games.