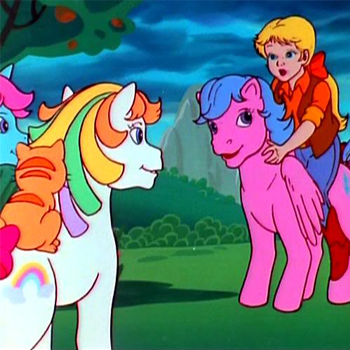 Apart from a limited theatrical run for the pilot of the humanoid Equestria Girls spin-off in 2013, Hasbro's long-running My Little Pony franchise hasn't been seen in movie theaters since 1986's My Little Pony: The Movie. But that's about to change.

Hasbro Studios has given a greenlight to a new animated feature-film for the franchise, which will be produced through the company's new production-sharing arm Allspark Pictures; which is currently putting the finishing touches on the live-action Jem & The Holograms movie. It is not known whether the film will be related to the current television incarnation of the series (MLP: Friendship is Magic) or another reinvention of the characters/concept.

Joe Ballarini (Ice Age: Continental Drift) will pen the screenplay, while Friendship is Magic writer/producer Megan McCarthy will executive produce. Hasbro is currently awaiting the box-office results of its first theatrical horror-franchise, the board-game-based shocker Ouija, due in U.S. theaters this week.