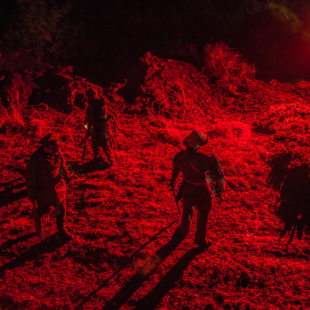 A mysteriously abandoned town, mutants, and a 1984-esque government await players in the MethanCity LARP.

Disaster has struck MethanCity. After a war that destroyed much of civilization, the survivors try to restore a government to preserve the human gene. When citizens and soldiers arrive at an old mining town, they discover it's deserted. That's where the fun begins in the Czech LARP, MethanCity.

Held in October of 2013, MethanCity's game begins an unfamiliar town where players find hints that the previous inhabitants left in a hurry. Some people begin to experience mental illness, and a group of mutants appear.

Worldbuilding makes this LARP a really interesting one. The official website gives a history of the world's recovery since the catastrophe, educating potential players on the government, religion, citizen divisions, and even a drink called Victory Gin, reminiscent of George Orwell's 1984. A superpower controls Eastasia and Oceania, led by the leader, who is often depicted on propaganda. In this society, tests genetic screenings determine the worth of each individual. Mutants and descendants of mutants are considered unlawful, and they are supposed to be terminated on sight to prevent further infections.

Most of the roles in the game are specific characters with roles in command and bureaucracy, from the chief protector to the main official to supervisors of urban production. Two scientists in the game research the mutations, a physician examines the mutations and other diseases, and another person in charge of news keeps propaganda going. There are also integrated citizens, members of the highest caste with the highest grade in the genetic screening, in the mining town.

Just like his previous photography work for other LARPs in the Czech Republic, Ondra Penicka was on site to document the LARP in a set of striking photos.