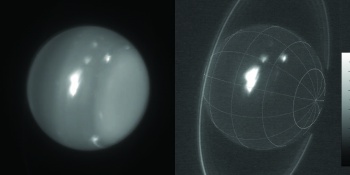 Sudden, intense storms on Uranus are puzzling astronomers - storms they would have expected seven years ago.

Seven years ago, Uranus reached its closest approach to the Sun, an event that happens once every 42 years. This proximity to our stellar heat source would have explained storms in the planet's atmosphere - but the storms are happening now, years late, and scientists don't understand why.

"This type of activity would have been expected in 2007, when Uranus' once-every-42-year equinox occurred and the Sun shined directly on the equator," research co-investigator Heidi Hammel, of the Association of Universities for Research in Astronomy, said in a statement. "But we predicted that such activity would have died down by now. Why we see these incredible storms now is beyond anybody's guess."

Imke de Pater, the project's lead researcher and an astronomer at the University of California, Berkeley, said this is the most active weather pattern he and his team have observed on Uranus in the past decade. The storms have gotten so severe that even amateur astronomers are able to observe them.

The W. M. Keck II Telescope in Hawaii first observed that something was amiss on Uranus on August 5 and 6 of this year. In October, the Hubble Space Telescope was assigned to the case and investigated the planet in several different wavelengths of light. According to the results, the storms are forming in Uranus' uppermost cloud layer of methane-ice. The gas giant Uranus, the seventh planet from the Sun and fourth largest planet in our solar system, has the coldest atmosphere of all the planets and a complex, layered cloud structure. The lowermost cloud layers are thought to be water, while the uppermost are methane.

Here is one image of the storms captured in August, as well as a more recent image showing the storm in infrared (click for full-res):

"The colors and morphology of this cloud complex suggests that the storm may be tied to a vortex in the deeper atmosphere similar to two large cloud complexes seen during the equinox," said Larry Sromovsky, a planetary scientist at the University of Wisconsin.

Check out these other pictures of Uranus: