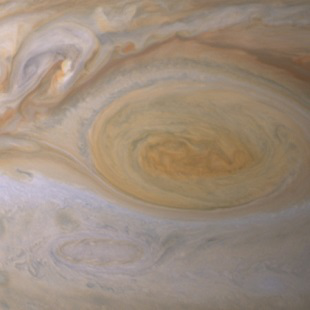 There's not enough sunscreen in the galaxy to help you now, Jupiter.

Jupiter's big, famous red storm might actually be a sunburn, if NASA's latest data is on target.

The new theory is based on data from some recent experiments coming out of NASA's Jet Propulsion Laboratory in Pasadena, California. The experiments in turn used data from the Cassini-Huygens probe's flyby of Jupiter back in 2000 (before it moved on to Saturn).

The findings come from JPL scientists Bob Carlson and Tom Momary, who were interested in why the red spot exists when there's no other region like it on the gas giant. Carlson and Momary ran ultraviolet light through a gas mixture of ammonia and acetylene, two very abundant chemicals in Jupiter's atmosphere (which is mostly hydrogen and helium). The result was a red color similar to the spot seen on Jupiter. The findings were further supported by how their experiment compared to the spot when viewed in infrared light, as Cassini also scanned the red spot with its infrared-capable spectrometer.

So if the UV-gas combination produces these clouds, why isn't all of Jupiter the same reddish color? The red spot is at a higher altitude than most of Jupiter's atmosphere. "Our models suggest most of the Great Red Spot is actually pretty bland in color, beneath the upper cloud layer of reddish material," said Kevin Baines, a NASA JPL colleague. "Under the reddish 'sunburn' the clouds are probably whitish or grayish."

The other theory for the red color is that chemicals below the spot's surface cause the coloration, but this latest data set seems to strike that thinking down.

Baines is presenting the findings at this week's American Astronomical Society's Division for Planetary Science convention in Tucson, Arizona.