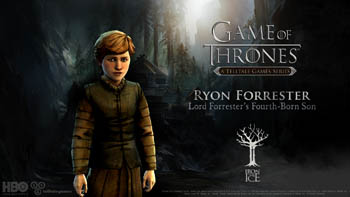 Telltale has revealed to us the youngest member of House Forrester in the upcoming Game of Thrones episodic series.

Editor's Note: We originally said Ryon is a playable character. That has not been confirmed by Telltale at this point. We have corrected the information and apologize for the error.

War has no mercy on children. Ryon Forrester, the youngest of the Forrester children, is going to learn that the hard way. Telltale Games has presented us with one of the new characters in its upcoming Game of Thrones.

Ryon is the fourth-born son of House Forrester and admires his older siblings. He's been spared from hardship as his childhood has been pleasant and he's had little to no responsibilities to worry about. Spending hours chasing his siblings Ethan and Talia through the grove, Ryon is just a kid.

But war cares not for your age.

As revealed last week, Telltale's Game of Thrones takes place between the end of the HBO show's third season and the beginning of the fifth season. House Forrester gets caught up in the War of the Five Kings. When the war started, Ryon's father and Rodrik left home, and Ryon had no idea why. Ryon has begun to ask questions of his siblings, who have no easy answers to give to the young boy whose innocence is fading.

Over the weekend, screenshots from the game leaked, depicting several characters from the HBO show. Telltale has confirmed the following characters in the game: Tyrion Lannister, Cersei Lannister, Margaery Tyrell, and Ramsay Snow. The actors from the show will reprise their roles for the game. That doesn't seem to be all the familiar characters - Telltale stated additional characters will make appearances in later episodes.

Also available today is a trailer, where several key characters from the books and TV show appear. Cersei calls the Forresters traitors as they've been loyal to the Starks. In the typical Cersei fashion, she conveys a veiled threat in her words: "You rely on your ironwood, that much is clear. It would be a shame to see it fall into the hands of another house. I imagine you'd do anything to prevent that from happening... wouldn't you?"

Game of Thrones will be played from five different points of view - one of them being Ryon's, and there are 13 total Forrester characters. Your decision as one character can greatly influence the events for a different character, making this game one of Telltale's largest in scope.

The first episode will premiere soon, but there is still no announced date. Telltale's Game of Thrones will be available on PC, Mac, PS4, PS3, Xbox One, Xbox 360, and iOS.