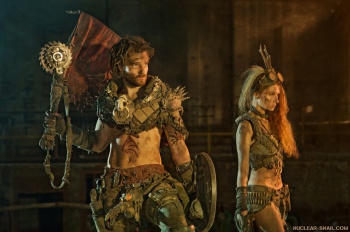 We're not sure why, but Europe really seems to love post apocalypse costumes and role-playing. Between the Hollywood quality costumes from Germany's Wasteland Warriors to the massive MethanCity mutant-inspired Larp, you'd almost think real life didn't wasn't so different from an actual apocalypse. And those aren't the only examples: Dimitri Seizef turned his childhood love of dystopian movies and video games into a post apocalypse costume operation called Nuclear Snail Studios.

"I have learned to love melancholic moods and end-of-the-world scenarios," Seizef writes on Nuclear Snail's Facebook page. "The spirit of adventure, the freedom and the self-determination, the survival of the fittest, expression of primal human nature, thrill of unexplored horizons and lurking danger. Also the everlasting trace of time and the notion of transience - all these ideas have always fascinated me.

"As the years passed, I have not become a post-apocalyptic, mutant-killing, napalm-drinking bad-ass. Instead, I have become an artist."

Seizef's work, much like that of contemporaries, really captures the spirit of post apocalypse films like Mad Max. What's more, Seizef has no problem sharing his knowledge and expertise - his YouTube channel has tutorial videos showing how his costumes are constructed and how it can be adapted for your own work. It all seems straightforward, but as you can see the effort really does produce quality work.

All that's needed now are tutorials on building off-road desert vehicles and defending against radioactive mutants and we'll be all set for actual end times scenarios. Although personally, I think I'll just stick to admiring the costumes.