Chibi-Robo is back with an adorably charming amiibo and Nintendo 3DS game, but are they Japanese exclusives?

Update: Nintendo has released a new Nintendo Direct Micro today that confirms our hopes - Chibi-Robo and the wonderful amiibo will be released in North America. The new game will be called Chibi-Robo!: Zip Lash but otherwise appears to be the same platformer seen in the Japanese video.

Chibi-Robo!: Zip Lash will launch in North America this October.

Original Story: The Nintendo Gamecube wasn't considered the most successful console it its day, but it had some absolutely charming exclusives. One of the most memorable of these was Chibi-Robo, which followed a ten-centimeter tall robot as he improved the lives of his human family and their various toys. Sadly Chibi-Robo is a bigger success in Japan than North America, but fans will soon have reason to order internationally - Nintendo just revealed a new Chibi-Robo 3DS game and absolutely adorable amiibo that will launch this year.

Chibi-Robo's latest game was revealed on a Japanese edition of Nintendo Direct earlier today. Instead of exploring Chibi-Robo's usual 3D world, this game is a side-scrolling platformer that Chibi navigates using his plug and cord as a grappling hook. Players can use the plug as a weapon, pull themselves up to high ledges, or destroy obstacles blocking their path.

As with other Nintendo titles, the Chibi-Robo amiibo will be an optional attachment to the game. Using it appears to level up your character, granting it alternate skins and abilities. The full range of uses in-game isn't clear, but one thing is absolutely certain - the amiibo is perfdectly endearing, and will prompt strong interest among Nintendo fans and collectors. 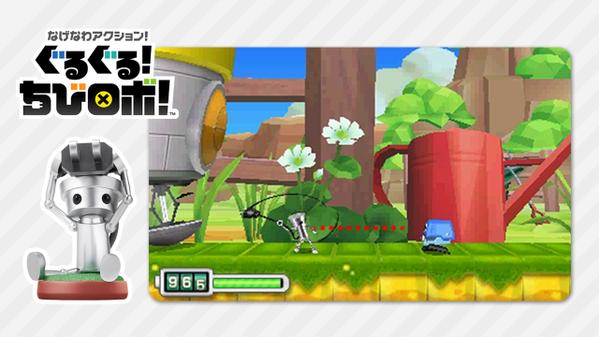 Of course, the downside is that we have no idea whether a North American Chibi-Robo launch is planned - both for the game and amiibo. Here's hoping there's enough interest to prompt an international release, otherwise the only place we'll find Chibi-Robo amiibos is through marked-up eBay listings.