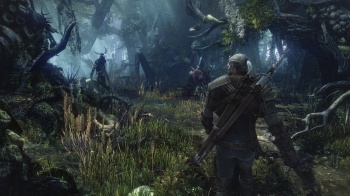 Owners of the Xbox One digital version of The Witcher 3 have found themselves unable to boot up their game.

Well, here's a story with a somewhat ironic twist. Despite its mockery of DRM, and developer CD Projekt Red's firm stance on the matter, owners of the Xbox One digital version of The Witcher 3 are finding themselves unable to play their games... due to a DRM malfunction.

Users are reporting the problem on reddit, and Microsoft's support form, all quoting the 0x87de2726 error code - which is apparently a licencing error. It's only effecting the digital version of the game as of now, so if you have a disk-based version you're golden.

Microsoft is aware of the problem, but has no timetable for a fix.

You can see this as either an ironic blow against CD Projekt Red for so staunchly mocking DRM, or rather a confirmation of its philosophy that DRM only ever punishes paying customers. After all, it was Microsoft, not CDPR that imposed DRM on The Witcher 3, and indeed the PC version of the game purchased from Good Old Games doesn't have any kind of DRM on it whatsoever.

Either way, things don't look good for Microsoft right now, which actually ran into a similar problem with Far Cry 4 earlier in the year.