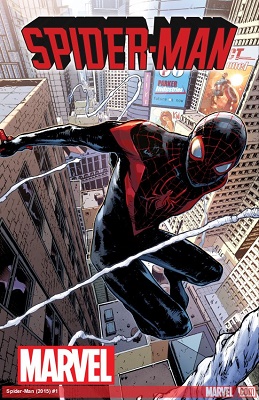 Marvel will be launching Spider-Man, a new comic focusing on Miles Morales, in Fall 2015.

Marvel is currently in the middle of its big universe-melding Secret Wars event. That in mind and with both the 616 and Ultimate realities coming to an end, the big question for many comic fans has been what will happen to their favorite Marvel heroes. The famous comic publisher, in turn, has provided more details about the fate of the Ultimate Universe's Spider-Man, Miles Morales.

Marvel, in an announcement today, confirmed that not only will Mr. Morales join the new post-Secret Wars "All-New, All-Different" universe, he'll also be headlining a new series simply dubbed Spider-Man. The book will be handled by the character's co-creators Brian Michael Bendis and Sara Pichelli. Speaking about the new series, Bendis expressed deep enthusiasm for Miles' future in the new Marvel universe.

"There was a time last year where I had given notice on this book. I thought that with the character moving into the Marvel Universe maybe that should be a time for me to bow out," said Bendis. "What I didn't know was that the plans for Miles were substantial: that he would be an Avenger or that he would be set up in a way because of things going on in different books to be the more traditional Spider-Man character...Once those elements revealed themselves, I politely asked to not leave the book. Story ideas flooded over me." Pichelli expressed similar excitement about the prospect of illustrating him again. "It feels so natural to be working again next to Brian on this. Like I did the first time, I'll work my ass off to draw the amazing story that Brian is writing for our Miles."

Miles Morales took over as the Ultimate Universe's Spider-Man back in 2011 following the death of Peter Parker at the hands of the Green Goblin. While some initially took issue with his introduction and Peter's replacement, the character quickly won over readers with his personal feeling, grounded stories. The new Spider-Man comic series will launch later this year in the fall.