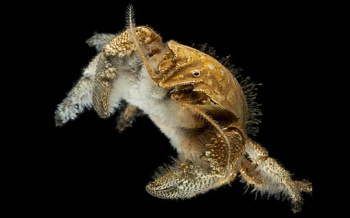 A species of yeti crab, formerly nicknamed "The Hoff" after television star David Hasslehoff, spends almost its entire life in a cramped existence between extreme cold and heat, farming bacteria on its furry chest for sustenance.

Despite winning so much goodwill with "Adorabilis", the scientific community has decided not to name a freshly described species of yeti crab after Baywatch star David Hasslehoff - officially, that is. Until recently it has been nicknamed the "Hoff" crab, largely due to its incredibly furry chest, though today it was given its scientific name: Kiwa Tyleri, after non-Baywatch star and deep-sea biologist Paul Tyler.

The crab formerly known as Hoff spends its life in an extremely precarious situation. The crustacean lives near vents at the bottom of the Southern Ocean, where super-heated water, filled with trace minerals and metals, flows up from below in perpetual geysers. The liquid that flows out of these vents is hot - up to 700F, some scientists believe. Step too close, and you quickly becomes an over-cooked crab cake.

Should the furry critter step just a little too far from the vent, however, they quickly freeze to death in the inhospitable Antarctic water.

More from the Escapist on biology.

To make matters worse for the Hoff, these vents are crowded - hundreds of crabs gather around, clinging to the rock and each other with specially evolved claws (see the gallery below to get an idea of how crowded this can get).

Like so many of evolution's oddities, the question to ask isn't why would a creature live here, but can it - since where life can survive, it usually will. These crabs don't just survive, though. It is hard to imagine how Kiwa Tyleri's ancestors came to live in places like this, but it is clear that their descendants have adapted to thrive. The super-heated, nutrient-rich water that is blasted from the vents these crabs call home is perfect food for certain types of bacteria, which these yeti crabs farm on their afore-mentioned sexy hairy chests and scrape off for nutrition.

Male crabs, larger than the females, can never leave the vent at which they are born. Females, however, are a little bit tougher and can make the journey when necessary, to find a new vent at which to lay eggs.

David Hasslehoff does not farm bacteria in his chest hair.

Escapist Podcast - Tabletop: 020: Can You Make the Best Critters to Survive Evolution? The Escapist Staff 1 Comment
Comments on