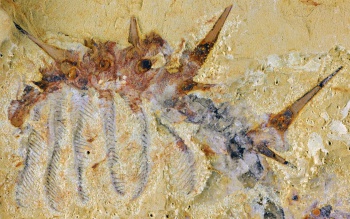 Hailing from the Cambrian Period, a newly discovered worm appears to have been decked out in armored plates and sharp spikes, and may have used projectile mucus to pin down foes.

A newly described Cambrian creature looks like it could make an excellent fossil Pokemon - with armored plates, spikes along its back, and projectile spit, it seems more at home in a JRPG than the tree of life. Still, this incredible worm was the real deal, and today the half-billion-year old critter was given its official name: Collinsium Ciliosum. Researchers have nicknamed it "Collins' Monster."

Named for paleontologist Desmond Collins, who may have been the first discover Collinsium in the 80s, the 15cm-long animal's incredibly well-preserved fossils have been uncovered in South China. Researchers from Cambridge and Yunnan University documented their find in the Proceedings of the National Academy of Sciences.

This thing isn't exactly an ultra-adorable octopus, but it certainly has its charm.

Collinsium is apparently related to the poster child of "Mind-Bending Cambrian Creatures," Hallucigenia. The latter earned its title because of its surreal nature - it puzzled and confused paleontologists so much that the scientists describing it could not decide which end it faced, or what side of it was up. It's hard to blame them: Hallucigenia looks like an extra-terrestrial, or a lesser-known Lovecraft creation.

Javier Ortega-Hernandez, a lead author of the study describes Collinsium as like "Hallucigenia on steroids."

More weird creatures from the Escapist.

Both animals have a modern relative in the velvet worm, an animal known for its ability to fire projectile mucus to capture prey.

In the gallery below, see artists' renderings of both Collinsium and Hallucigenia, a fossil of the latter, and an image of a modern velvet worm:

The Cambrian Period is when evolution was throwing a lot of spaghetti at the primordial wall, and seeing what stuck. In a short - geologically-speaking - span of time now referred to as the "Cambrian Explosion," most major animal phyla made their first appearance in the fossil record.

Escapist Podcast - Tabletop: 020: Can You Make the Best Critters to Survive Evolution? The Escapist Staff 1 Comment